Global Health students on a forest bridge in Ghana.

The purpose of this scholarship shall be to provide recognition and financial assistance to full-time faculty, fellows, residents, medical students or graduate students at Penn State Health Milton S. Hershey Medical Center and Penn State College of Medicine to undertake health policy study programs outside the United States.

Applications will reopen in Spring 2023. 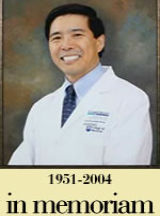 Mark’s leadership skills were rapidly recognized by Penn State, and in 1997, he was recruited to become the first chair of the newly formed Department of Health Evaluation Sciences. Mark spent the next six years simultaneously leading two large Academic Health Care departments – one at LVH HN in Allentown and one at The Milton S. Hershey Medical Center (HMC), Hershey. The Department of Health Evaluation Sciences (HES) evolved from the former Center of Biostatistics and Epidemiology which had been created by the Penn State College of Medicine in 1988. When HES was elevated to departmental status and Mark took over the reins as the first HES chair in 1997, the department consisted of six tenure track faculty members, whose expertise was largely in biostatistics, and 40 staff members. Under Mark’s leadership, the number of tenure track faculty grew rapidly in number and fields of interest. When Mark stepped down as HES chair, in 2003, there were 16 tenure track members with expertise in biostatistics, epidemiology, and health services research and approximately 60 staff members in the department. Total research dollars in HES nearly tripled during Mark’s six-year tenure – rising from $1.7 million to $5.0 million.

Mark was a tireless educator and a life-long learner.  At LVHHN, he was the Associate Dean for Education, and he coordinated resident activities between Penn State and LVH. He was also instrumental in establishing a medical student program between the University of Indiana Medical School and the Moi University in Kenya. He hosted many Kenyan medical students who studied at Lehigh Valley Hospital. In part, as a result of his own clinical experiences in Kenya, Mark routinely donated clinical time at an AIDS clinic in Allentown.

One of Mark’s most notable achievements was the creation of a totally new masters’ program at the Penn State College of Medicine to train physicians to become successful clinical investigators. Mark was the architect of this program which went from his creative concept in mid-1997 to enrolling it’s first class of physician students in July 1999. The program has routinely graduated four to six physician scientists each year since 2001 and has become an integral part of several new Penn State initiatives designed to expand Penn State’s clinical research enterprise.

Mark’s efforts to make the world a better place were felt in many ways outside of his medical centers endeavors. He strove to improve education and promote the arts in Allentown by serving on the Allentown Health Bureau’s Strategic Planning Committee, on the Lehigh Valley Business Education Partnership, on the Mayfair Festival of the Arts, and on the Institute for Healthy Communities. He also served on the Allentown School District’s Community Council, co-chairing the Empowerment Team and the high school Reform Committee. Mark was a citizen of the world who fully understood how important it is to smile and enjoy each moment. He had a remarkable ability to see the big pictures and yet understand the hopes and needs of all of the folks who work on only one small part of any canvas, and to listen to each and to be their spokesperson. He was a caring physician, gifted teacher, who, as in everything that he did, was giving his all in a tennis match when he passed away April 24, 2004, at age 52.

In general, one award per year of up to $3,000 will be made. Applications are sought in the spring of the year and the awardee is announced in April. It is expected that the program activity will occur within six months of receipt of the award and that the awardee will make their presentation at Penn State Health Milton S. Hershey Medical Center within six months of completion of the funded program.

The committee sets the timing for the request for applications, reviews the applications and selects the awardee(s). The committee reserves the right to make no award if no suitable application is received. In rare circumstances, the committee may decide to make two awards in the same year if funds are available.